Crumbling discoveries in the Ice Cave

The story of the discovery of the cave Ledena jama pri Planini Viševnik (Ice Cave at Viševnik pasture) has long history, dating back to before the Second World War. The cave with three entrances was certainly known to shepherds from the nearby pasture, as the highest entrance is clearly visible from the path between the Viševnik pasture and lake Črno jezero. The first record of the cave was made by Egon Pretner in 1939 under the guidance of local guide Jakob Žvan, and he visited the cave again thirteen years later with Ivan Michler. At the time, he mentioned a 60-meter-deep ice abyss located behind the highest entrance, and through the lowest entrance we still use today, they probably did not enter because of the large amounts of ice.

Upper entrance to the ice cave

The Speleo Club Železničar began to explore the cave in the 1970s. Even then, cavers noticed a significant reduction in the amount of ice in the hall and detected drafts, which also in later years became the main culprit of the accelerated melting of ice. They made a plan and rightly assumed the connections of all three entrances. In 1990 we visited the cave again. There was even less ice, and in the Hall of Rings, just behind the entrance hall, there was a gaping abyss about 20 meters deep, but the transition to the new parts had not yet been discovered. 18 years later, a new visit was organized. The Hall of Rings once again showed a new image, and a large opening yawned at the edge of the ice slide, finally opening the way for new exploration.

I last visited the cave three years ago. During this time, sleeping in a cave became necessary if you wanted to do something more than just visit it. Thus, for a decent exploration, one has to sacrifice the whole weekend, including Friday, when one usually spends the night as close to the cave as possible. With the new discoveries, the length of the cave has already approached two and a half kilometers, and during each visit, new rooms usually open and simultaneously new puzzles are solved. Due to the managing the free weekend, time difficulties and the complexity of the cave, there are therefore only a few cave visits per year.

Hospitality in Bregar's shelter on the Viševnik pasture

In front of Bregar's shelter

At the end of August, we finally managed to put together a team of volunteers. This time, the ever-present Miha Staut convinced Edi Benko, the young caver from Ajdovščina who has been successfully tested in deep high-mountain caves for years. Our classic course of the exploration, leaving on Friday afternoon, spending the night in Bregar’s shelter on the Viševnik pasture and visiting the cave on Saturday, was spoiled only by bad weather. While walking in the pitch darkness to the mountain, we were caught in a light spray of rain, but Saturday’s experience was fortunately a shade more bearable. 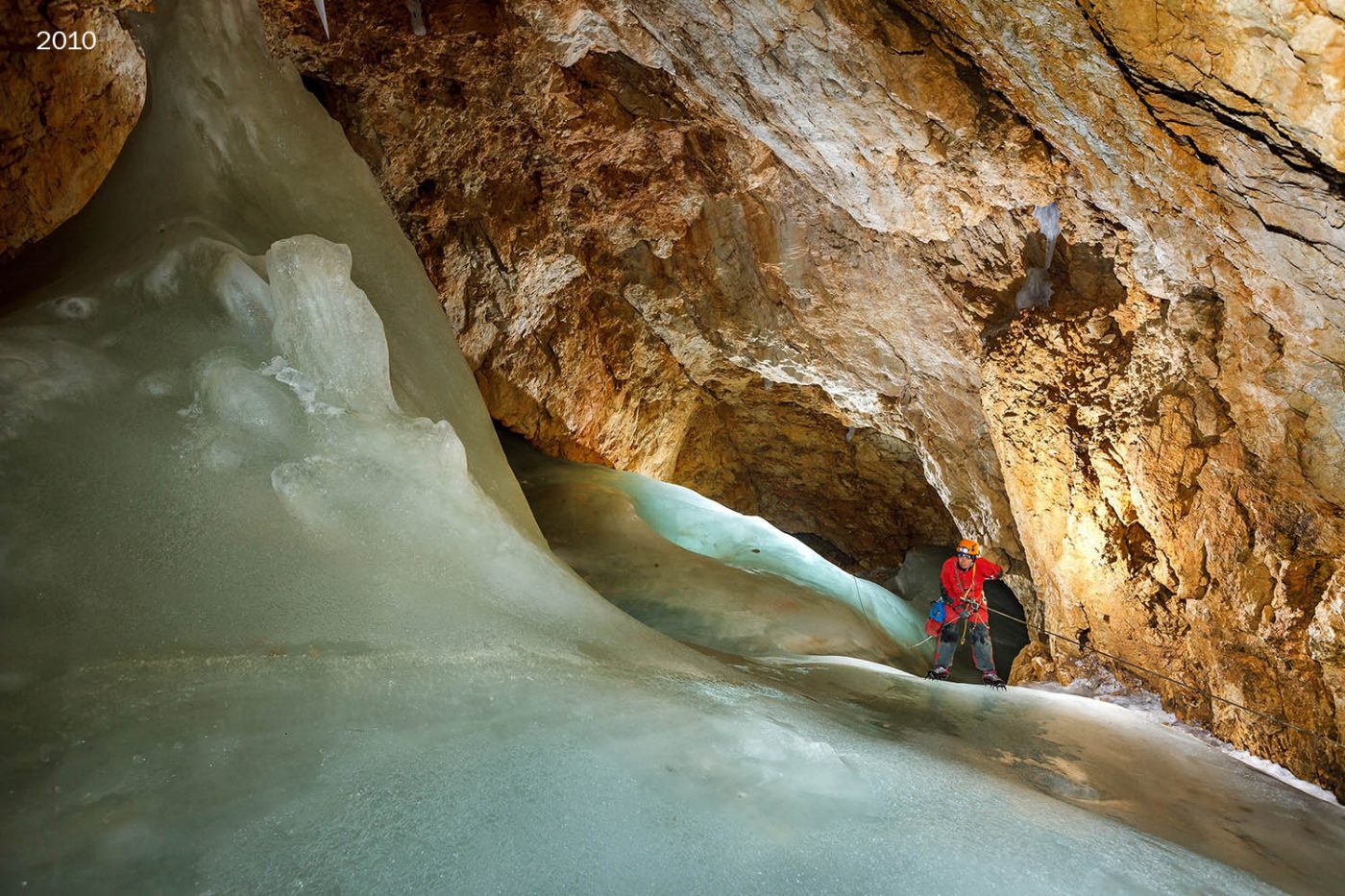 Relatively dry, we dressed in cave clothes in currently still icy entrance hall. The ice is, of course, disappearing relentlessly, and in the good decade since we have been visiting the cave, it has already melted a lot. As a result, the appearance of the entrance hall with the ice slide is completely different, and the two logs (which we like to call the legs of the Viševnik witch) at the end part of the ice have been completely exposed for more than five years.

Legs of the Viševnik Witch

This time our way to the bivouac meandered through the widened straits BB pajsaže (BB passages) and the abyss Zloba (Evil), which significantly shortened the usual path through the higher tunnels. Since these parts have not yet shone through in the photos, we spent a little longer here, especially with the speleothems decoration, which is a real rarity for these high-mountain parts. The halls and tunnels of the Tretji pokojninski steber (Third pension pillar) were also present until the transition to the connecting Dvorana socialnega dialoga (Hall of Social Dialogue). We named these unusual names of parts of the caves during the research that took place at the time of political decisions on these topics and we found them so endearing that we wrote them down for eternity.

In the Beginning of The third pension pillar

On the way to the bivouac, we widened the passage in the Mlečni meander (Milky Meander) and a little after four o’clock in the afternoon we were forced to stop below the last step in front of the bivouac. Unfortunately, this was due to a minor accident in the form of a falling stone that landed on Miha’s nose. Despite the considerable dripping of blood, the wound was quickly treated and, to everyone’s delight, left no physical or psychological scars. The majority of the set tasks were still waiting for us. To peek into the newly discovered parts of the Sliva (Plum trench), to which Miha last climbed with the help of Matjaž Božič, and to photograph the Kravji bal (Cow’s Ball), a tunnel that steadily opens to the north at the same height.

The entrance to the Sliva leads through collapsed blocks and begins in a larger hall, chaotically paved with landslides and blocks. At the edge of the hall, we peeked fearfully into the wide Strašno brezno (Terrible Abyss), which will probably never be visited, and we devoted more courage to the northern web of narrower and wider passages that led us to the upper parts of the Kravji bal. In these spacious parts, a new watercourse comes from the side, flowing from a higher, east-facing tunnel. Let’s say it filled us with hope for discovering new parts, although we still believed we would have more luck in the southern part of the entrance hall.

A spacious and wide abyss leading to the meander Sliva

There the chaotic situation continued, collapsed blocks reigned everywhere, and at the very end a new, even more spacious abyss opened up, which fortunately allowed a safe descent. At the bottom we entered a narrow meander through which water flowed and of course we immediately thought it was water descending into a lower already known hall. More interesting, of course, was the completely unknown inflow part and the higher-lying tunnel, again directed to the east and even paved with old and weathered flowstone slabs.

We surveyed about 250 meters, produced two questions about possible proceedings, and returned safely to the bivouac. All hopes of a hot meal were buried by the discovery that we were without a gas stove, but at least the tents did their job and warmed us up until Sunday morning while we slept. Sunday was reserved only for departure, but we still could not resist the continuation of the widening of the Mlečni meander, only this time much more successfully.

Outside, the weather took pity on us. The path was even dry, just the right temperature and the hospitality at Bregar’s shelter came in handy. Only the devastation, which takes place near the lower parking lot and reminds of the testimony of a battle, spoiled our good impressions. The once beautiful path has thus become a muddy road, but time will probably heal these wounds as well.

Hospitality in Bregar's shelter on the Viševnik pasture

In front of Bregar's shelter

Access to the cave leads through a steep wall

Access to the cave leads through a steep wall

There is less ice in the entrance hall every year

There is less ice in the entrance hall every year

Legs of the Viševnik Witch

In the Beginning of The third pension pillar

Detail in The third pension pillar

Working in the Milky Meander

Working in the Milky Meander

Relaxing in the bivouac after the accident

Detail of the hall

A spacious and wide abyss leading to the meander Sliva

Returning through the Mousetrap

A view towards the entrance of the Ice cave

Group photo at the Bregar's shelter

At the parking spot