Cooling off in the cave Markov spodmol

In the heat of summer, when the rays of sunshine raise the bar of the thermometer to insane levels, the cave climate with its average of eight degrees Celsius is a godsend. The entrance part is usually the most refreshing, as it is where the outside and inside air mix. It is already pleasantly cool there, but still warm enough for a longer lounging session. It isn't advisable to do that deeper in the cave, at least not in summer clothing, as it is - despite the pleasant cave climate - cool enough for a troubling situation.

This time around, we were wearing too much clothes. Instead of underwear, we stuffed ourselves into our neoprenes, which raised our body temperature to a boiling point. We dragged ourselves to the entrance of Markov spodmol with some strain. Sweat was already dripping from our sleeves and there were puddles in our boots as we felt down the pebbles of the entrance parts, trying to calm down our crazy fast heartbeats.

My failed visits of Markov spodmol have been a work in progress. There were many visits planned, many at a time when divers connected the cave into an 8 kilometer long system with the Water cave in Loza, but something always came up. This time, I was reminded of the cave by the writings of Italian photographing group S-Team. They visited the cave recently, and, as is their habit, took some great photos. All I had to do was assemble a team, which wasn’t tough despite the vacation time.

Markov spodmol is a sinkhole cave at the end of Sajevško polje, and, as is usual for water caves, is full of potholes, washed walls and lakes. It is also known for its limestone formations, especially in the end of the cave, where they create magical colored contrasts. Another specialty of the cave are the distinct scallops. If lit correctly, they shine like something out of a fairytale, and especially on photographs, where flashes give them that extra sparkle. Since the cave is often interrupted by lakes, it is easiest to visit it in neoprene, but there are some people, including first time visitors, who tried going there with boats. It turned out that wasn’t as simple as it seemed. 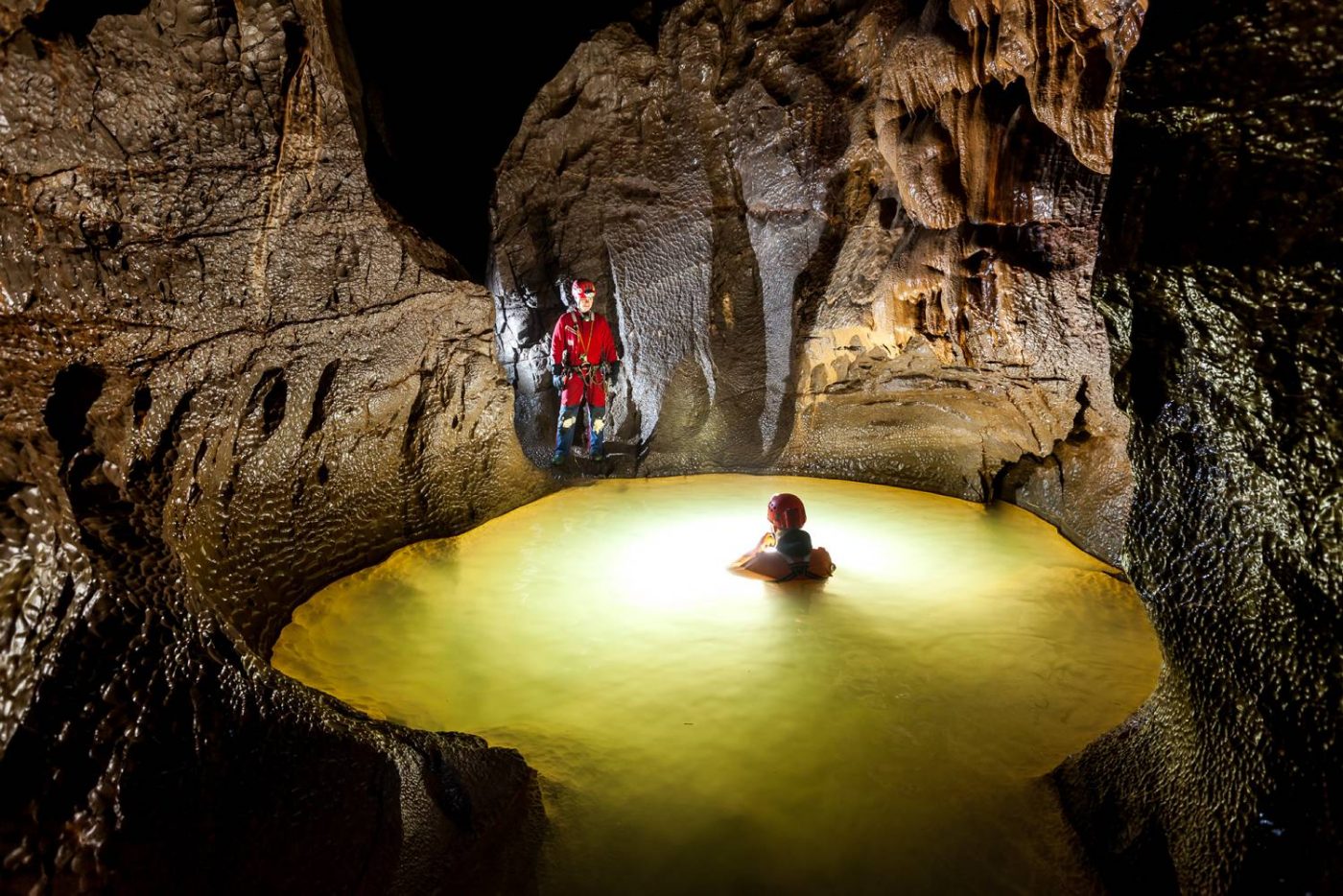 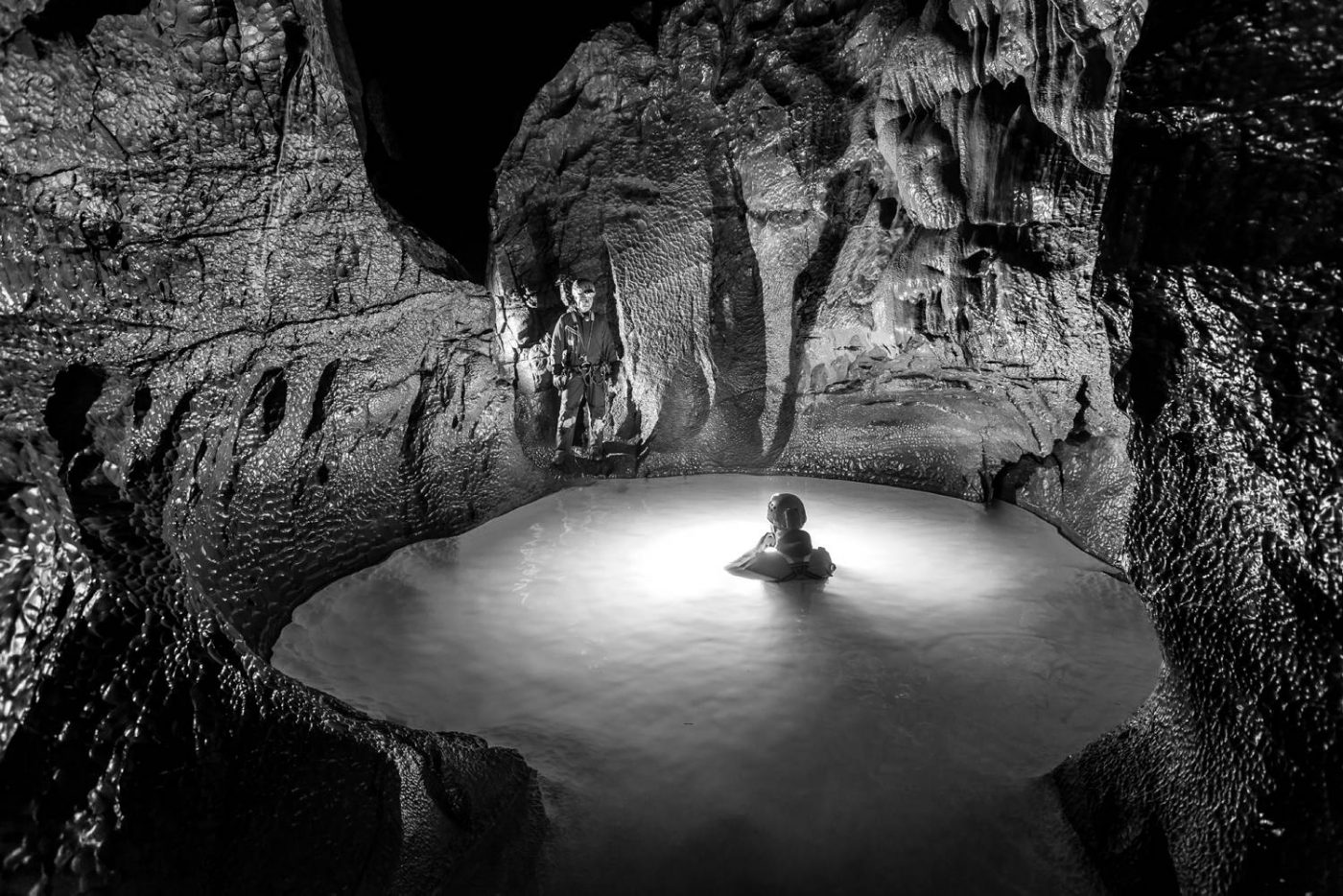 The cave is not very unique when you go in, but impressions soon improve after the first waters make an appearance. A watchful eye will notice the scallops, and in later halls, also layers of coal. Several decorated halls with lakes follow, all to the point where the shaft descends to the final siphon. After a simple canyon we tackled the second level and descended the edge of a nice sedimented pool, finishing out visit with a viewing of the siphon lake. The end of the cave was reached soon, but not during our return, which is custom when visiting a cave with a photographer.

Unlike the others, I was pretty hot in the thick neoprene, and I was always looking for a chance to take a dip. The most beautiful opportunity presented itself in the siphon, where the water was only slightly murky, and there was still a visible diving cord. A gorgeous space, filled with countless scallops – obviously ideal for my first photograph, with my wonderful isolation, I was the only hero ready to pose in water. It was also the moment when I remembered my brother Tibor, who swam into a similar lake in Jazbina v Rovnjah – naked – just to get a good photo. I was pleasantly warm, while he was probably freezing cold at the time.

Vid was also becoming colder and colder, as he was only in the bottom part of his neoprene and ordinary socks. Bole was also a little shaky in his three millimeter neoprene suit, and Mojca wasn’t far behind, spending most of our visit crouched down, waiting for my fantasizing about the best shot possible. After a few hours, they gave me some strange looks, as I was getting hotter and hotter, while they were very cold. There were many motives, way more than I anticipated in the beginning, as the cave is incredibly picturesque practically on every corner.
Obviously, a lot of time was spent in the part of the cave where the scallops are most prominent. To be honest, I could easily experiment in this area. Countless scallops everywhere, on the ceiling, walls and the floor, I could focus on millions of ways, details and patterns as well as contrasts – a true fairytale land for any photographer. A 3D shot was needed as well, and perhaps it will show the true magical beauty of the space.

Because of the abundance of motives, my concentration was starting to dissipate. With every shot, I promised it would be the last, but as we turned another corner, I made a new one. Finally, we couldn’t take any more and we packed up and went outside to warm up. During the way back, the motives were countless, including a more famous one with a nicely drawn profile, so another visit of the cave is imminent. I just hope nothing comes up this time!