A bit longer review of posts and awards

The year 2016, already far away, was almost entirely linked to the Škocjan Caves.Besides to the 3D project that started in the distant year of 2008 and I finally finished it in the year 2016, there were some additional challenges. The reason was the upcoming celebration of the round anniversary of the entry of the cave in the UNESCO list, the main goal was to issue photographs in an attractive book form. So, I crossed the tourist parts with my team in some expeditions, and the most interesting were the expeditions in the Hanke Channel. The last one was dedicated exclusively to the Martel Hall with photographer Borut Lozej and a four-member support team (Boštjan and Mojca Vrviščar, Lara and Sara Pirjevec) where we made photos of the largest underground hall in Slovenia.

Even before that, the National Geographic magazine on US National Parks and the Triglav National Park exhibition opened in Tivoli Park in April. My photography from the second-largest underground hall in Slovenia, located in Brezno near Medvedova Konta on Pokljuka, was also included in the selection. The hall itself is not very photogenic, but it is interesting because of the huge dimensions that are emphasized in the photography by three cavers placed on the key points of the hall. The photo was also selected for the article on the Triglav National Park in the May issue of the Slovenian edition.

In May, a special edition of the National Geographic magazine was published, named: “The most beautiful places in the world.” Among the world’s landmarks, several Slovene locations were added to the Slovene editorial board, including the Škocjan Caves. The selected photo is otherwise one of the images of the already mentioned 3D presentation. Towards the end of the year, an extensive article about the Škocjan Caves was published in the December issue of the National Geographic National Edition. Photos from recent actions and additional photos from Borut Lozej were published, while the text about experiences was created by Borut Peric. All the effort can be described in one word – wonderful!

In February 2017, I was invited to the Dutch Mountain Film Festival as an exhibitor. The exhibition was, of course, a cave-themed, which may be an unusual topic for such a festival, but it was well received, although the Dutch do not have any caves or mountains. The exhibition of the Government of the Republic of Slovenia titled “I Feel Slovenia. I Feel Culture“, which opened across different European cities, was certainly a highlight, and well received and I myself participated with a photo from Magdalena Cave. Unfortunately, the exhibition was not hosted in any Slovenian city, so we did not manage to see it, but it was probably similar to the previous one on the occasion of the 25th anniversary of the Republic of Slovenia, with large panels and decent magnifications.

In April, an online edition of the Wired magazine published a contribution about “epic” Instagram profiles with cave themes and included among my six selected ones. The German branch went a step further and put me among the 12 nature photographers on the Instagram that you should follow. The response to the article was significant, resulting in some interesting posts. I am most excited about the talk in the show / podcast: “Strašno hudi“, which is being prepared by the journalists Klara Škrinjar and Maja Čakarić. In an imaginatively composed show, we touched my creativity through different views, and his point of view added Boštjan Vrviščar, a longtime cave-photographer “slave”. There was also planned a shorter contribution for the broadcasting of the Svet on Kanal A, which we also painstakingly recorded in one day. It was a nice conversation and a basic  school of cave photography (the result is below), but why it has not been published, I was unable to find out, despite several inquiries. Pity.

But we had more luck with an interview with the Manager appendix in the Finance magazine prepared by Gorazd Suhadolnik, which already at the beginning promised that it would not be a just a dry list of data. Certainly, I can not overlook the publication that was published in the weekly magazine Mladina. There Vanja Pirc sensibly connected my previous work, thoughts, and acknowledgments to a beautiful completion, thus providing one of the finer contributions.

This was followed by another publication in the national edition of National Geographic, this time in the revised section “Explore“. For this contribution, we visited the Karst gold cave in the Karst region of Karst, in which the researchers discovered water, which is a great discovery for these places. This time I contributed a text about the photo, which I think is a necessity in the case of cave photograph. It is not clear to a lot of people what to do in the caves at all, what kind of effort a cave demands and what the photo represents at all. For example, this is the look of the team that spent the day with real Karst gold – the mud!

At the end of this long writing, there are some more awards. There were not many, in fact, I can mention only the third place in the competition of the Balkan Speleological Association in the category of “Cave beauty”, while others somehow were not capable of visible rankings. More luck next time. 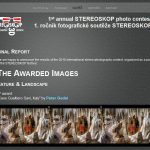 All photographs and text appearing on this website are protected under domestic and international copyright laws. This intellectual property may not be copied, copied to another computer, transmitted, published, reproduced, stored, manipulated, projected, or altered in any way without the written permission of Peter Gedei. No images are within the Public Domain. Use of any image as the basis for another photographic concept or illustration is a violation of copyright. To secure reproduction and use rights, please contact Peter Gedei.
In the entrance part of the water cave Markov spod

It can be quite interesting here during high water

The end of the magnificent passage Kozinski rov, w

Towards the top of the side passage in the cave Li